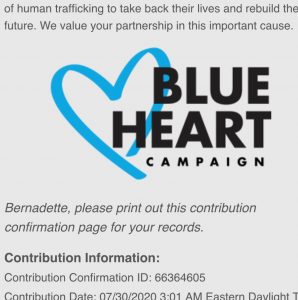 KoKo Adora has recently donated to 𝐓𝐡𝐞 𝐁𝐥𝐮𝐞 𝐇𝐞𝐚𝐫𝐭 𝐂𝐚𝐦𝐩𝐚𝐢𝐠𝐧 💙 as we hope for a better future with no trafficking of persons in it and are particularly focused on a safer world for children.

Yes, it’s uncomfortable and heart breaking to talk about or fathom but trafficking of persons is happening and is a serious issue. 𝐓𝐡𝐞 𝗪𝐨𝐫𝐥𝐝 𝐃𝐚𝐲 𝐚𝐠𝐚𝐢𝐧𝐬𝐭 𝐓𝐫𝐚𝐟𝐟𝐢𝐜𝐤𝐢𝐧𝐠 𝐢𝐧 𝐏𝐞𝐫𝐬𝐨𝐧𝐬 being today, 30th of July, was proclaimed by the United Nations General Assembly, in its resolution A/RES/68/192.

Trafficking in persons is a serious crime and a grave violation of human rights. Every year, thousands of men, women and children fall into the hands of traffickers, in their own countries and abroad. Almost every country in the world is affected by trafficking, whether as a country of origin, transit or destination for victims.

The Blue Heart Campaign 💙 is a global awareness raising initiative to fight human trafficking and its impact on society.

It seeks to encourage involvement from governments, civil society, the corporate sector and individuals alike, to inspire action and help prevent this heinous crime.

The Blue Heart is increasingly recognised as the international symbol against human trafficking, representing the sadness of those who are trafficked while reminding us of the cold-hardheartedness of those who buy and sell fellow human beings.

The campaign allows people to show their solidarity with the victims of human trafficking and increasing their visibility by wearing the Blue Heart.

Donations to the Blue Heart Campaign go to the United Nations Voluntary Trust Fund for Victims of Trafficking in Persons, which provides vital assistance and protection to the victims of trafficking through specialised organisations across the globe.

Transpiring a mothers love through matching mother and daughter outfits

Shop it, wear it, share it:
Featured top categories: